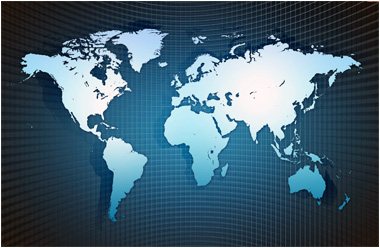 The most expensive laser tag system – probably, it was Photon, the first laser tag in the world. The price for a single arena retail franchise could be as high as USD 1,200,000. In the picture below: Photon players. 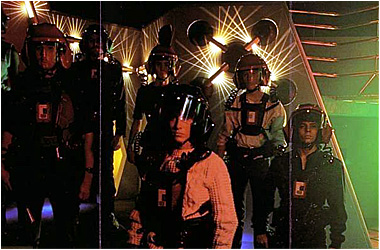 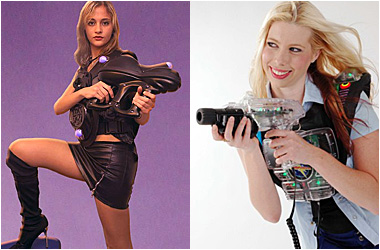 The most famous laser tag brand - is for sure Q-Zar, Earth’s beloved laser game. In spite of the fact that no single set of this equipment has been manufactured since the late 1990-s, this brand is still often used as a synonym for laser tag: 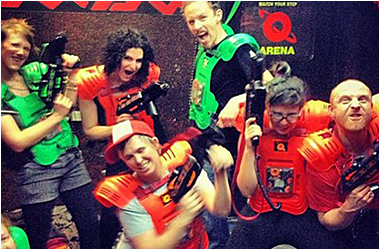 The biggest quantity of different types of laser tag systems produced by one and the same manufacturer - this record has been achieved by Zone Empire (founded by Australian P&C Micro), the current manufacturer and distributor of such systems as: Zone T, Infusion (marketed till autumn, 2010), Nexus, Nexus PRO, Begeara, Zone Skirmish (outdoor system), Hangar 51 (distributor). Besides, this company introduced rather a wide range of laser tag brands: DarkZone, MegaZone, Zone Laser, Zone 3, Zone 4 (though all of them are used to name one and the same system, yet in different countries). In the picture below: a MegaZone player. 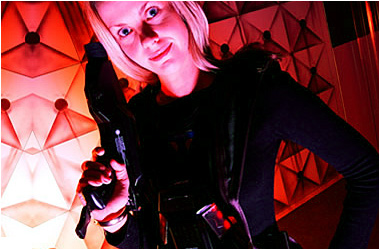 The biggest number of modern laser tag systems inspired by one and the same system - is probably 4; all of them being inspired by Actual Reality (which is out of production at present time). In the picture below: advertising poster issued by Actual reality arena in Swedish Stockholm (now the system there was changed). 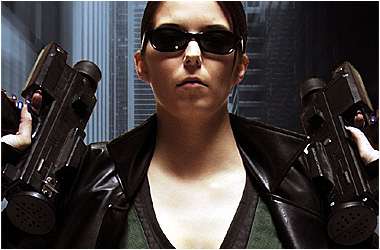 The greatest number of players simultaneously participating in one laser tag game – is 436; this record was achieved in January, 2013 at a BattleField Sports' site in Australia. The previous record (2008) was 279 players, and the 'official' Guinness Book Record is 250 only. At the picture below: a BattleField Sports player holding a Combat Rifle M16/A2/M203: 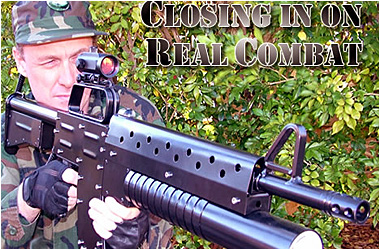 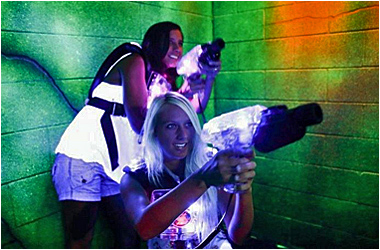 The largest laser tag maze in Europe (as per 2012) – is, probably Dutch Silverstone Lasergames (LaserMaxx system) at Zwanenburg with a 1500 sq.m maze: 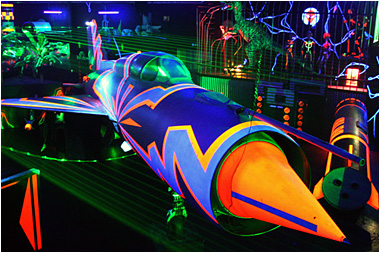 The biggest laser tag arena in Europe with two or more mazes (as per 2012) - is the opened in spring, 2010 LaserZone in Bradford, United Kingdom. The 1670 sq.m' arena is equipped with ZetaBlast (Laser Blast) laser tag system for 40 players and has a multilevel maze themed after Resident Evil movie (see the Red Queen and the Laser Corridor at the picture below): 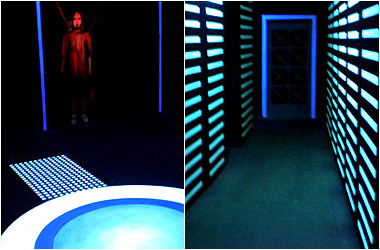 World's largest indoor laser tag site (as per 2012) - is LaserMaxx Wien arena (LaserMaxx Evo-5 system) in Vienna, Austria with indoor playing zone of 2500 sq.m (the previous record belonged to US Hard Knocks in Orlando, with 2200 sq.m of playing grounds; 2010-2012). At the picture below - part of the playing zone of LaserMaxx Wien: 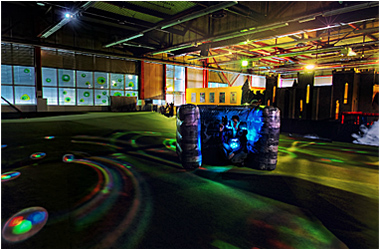 The heaviest laser tag phaser (as per 2012) – probably the first place here can be shared between heavy machine gun phazer Gattling Gun produced by American Zone Skirmish and Cannon phazer produced by Australian BattleField Sports. In the picture below: Gattling Gun (upper left corner) and Cannon (mounted on the motor boat). 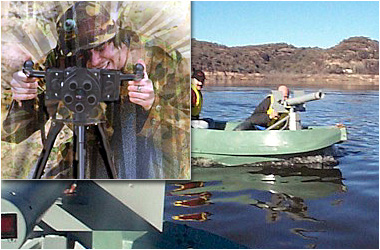 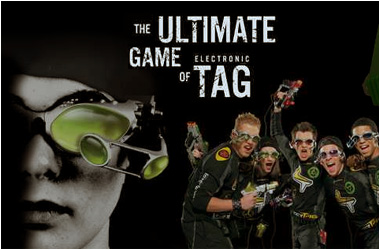 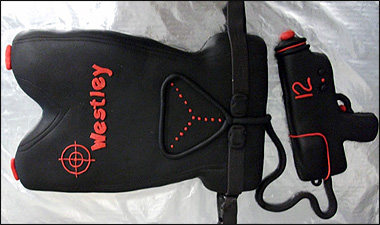 The first laser tag site to be opened in the ex-USSR was a Q-Zar arena in Minsk, Belarus. The site was opened in 1995 and closed in the late 1990-s.

The oldest laser tag site in the ex-USSR that is still in operation is LaserMaxx (former Q-Zar) arena in Roll-Hall FEC, Moscow. In the picture below: Roll-Hall FEC at night. 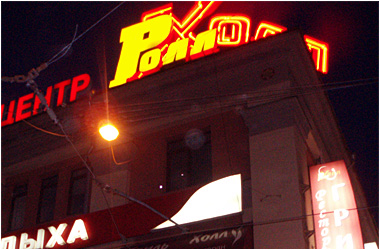 The most popular laser tag site in the ex-USSR (as per 2010) – was Quasar Elite arena at Lider FEC, St.-Petersburg. Equipped with 40-vest system, this arena was so popular that the operator had to divide the players into four leagues with the aim of managing the playing time. In the picture below: a player is attacking head-quarters in the maze of Lider arena: 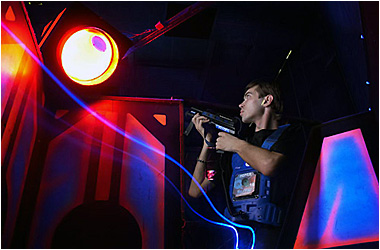 The most non-typical laser tag site in the ex-USSR - was BaZa arena in Almaty, Kazakhstan. They used Laser Mania system, which is rather rare in Europe. Besides, the phazers used at this site had undergone some special modification thus possessing unique look. In the picture below: a BaZa arena’s player holding the unique Laser Mania phazer: 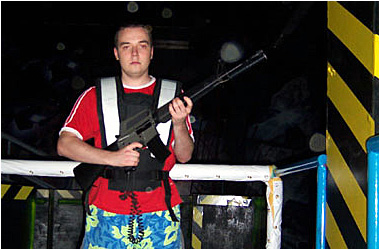 The highest price for a laser tag game – was charged at Q-Zar arena in KartLand FEC in Moscow (was closed in late 2006). For a standard 15-minutes’ game the players had to pay about USD 20 per person.

The most expensive laser tag site in the ex-USSR (as per 2010) – is probably equipped with LaserTron system Game Zona arena at Warsaw Express FEC in St.-Petersburg. The approximate price of building and equipping of this arena could be more than USD 300 per square meter. In the picture below: maze of Game Zona arena. 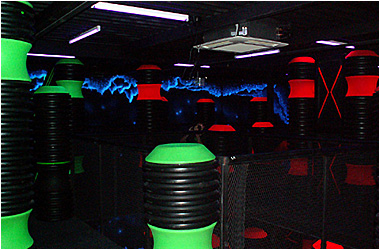 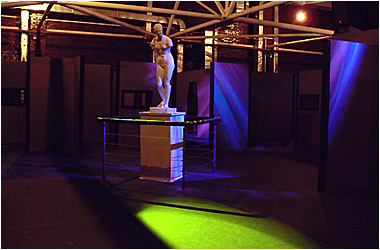 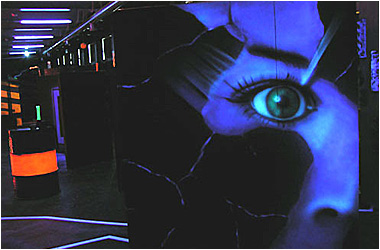 The simpliest laser tag maze (as per 2012) - was the maze of Venski Dom arena (Ataka system) in Kharkov, Ukraine (closed by now). It consisted of metallic shanks and cloth panels tight to them.

The first two-level maze to be opened in the ex-USSR – was the maze of Igromax arena (Q-Zar system) in Moscow, operated in 2005-07. In the picture below: the second floor of the maze. 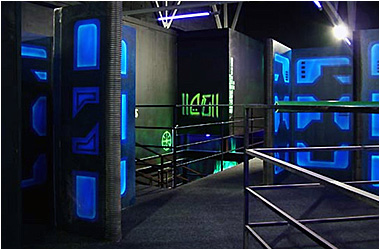 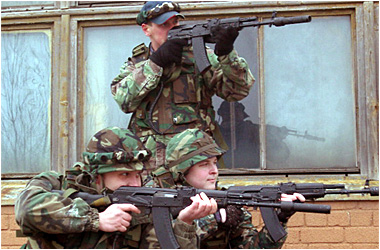 The most prevalent outdoor laser tag system in Russia (as per 2010) - is Russian-made Poligon 64: they have at least 46 confirmed active operators that joined Poligon network (by the end of 2010 and according to the information provided by the Manufacturer), plus some other sites using their equipment (up to 40), as well. In the picture below: Poligon 64 players: 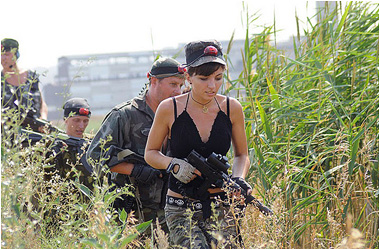 The most formalized laser tag game rules have been introduced at Quasar Elite arena in Lider FEC in St.-Petersburg. Actually they were used by regular players. There were more than 30 articles in the official edition of them.

The hardest style of laser tag playing was practiced at Start arena (Q-Zar system) in Kiev (the site was closed in 2000). There, it was allowed to run, to push the opponents (as they do in ice hockey), to cover the side hit sensors of the phazers and to even shift the maze elements during the game.

The first laser tag totalizator was introduced in November, 2002 at Seven Stars arena (Q-Zar system) in Krasnodar: during the arena championship the visitors were allowed to gamble on the Winner.